What Happened To The Art At The Festival?

In the video reviewing this year’s Catalyst Festival, David Devenish spoke of “the celebration of creativity in the arts” which had been such a feature of this year’s Festival, and this was certainly more the case this year than ever before.

You couldn’t walk through the main square on a given afternoon without being accosted by singers, rappers and musicians. As you entered the foyer, you were confronted by the main gallery, accompanied this year by the lounge gallery just round the corner. Then even on the main stage, as well as the highly skilled worship musicians we are always so blessed by we even had a couple of performance poets doing their thing.

That is to say nothing of the arthouse film night, creative worship jam, contemporary dance performances and art workshops. A celebration of creativity in the arts indeed!

The theme of the Sputnik Zone this year was based around the question “what is it to be human?” Sputnik set this question in January and received submissions from over 70 visual artists, musicians and writers, the vast majority of whom are from Catalyst churches.

The final selections from these submissions were presented in the main gallery at the Festival, as well as in the WhatIsItToBeHuman? pack that featured postcards of images from the gallery, a CD album and a writers’ anthology.

And while your tents and camping stoves may be packed away by now, this work is far from gathering dust. In fact, it is winging its way around the UK to feature in five public exhibitions, all linked with Catalyst churches. We’ve just taken down our Coventry exhibition and are on our way to Milton Keynes next, and after that Newcastle, Birmingham and London.

All of the work is now available to view, read and listen to on our exhibition website. Thanks so much to all those who got involved with the Sputnik Zone and the WhatIsItToBeHuman? project this year. Keep an eye out for the public exhibitions and see if you can go and visit, and maybe even invite some friends along too. 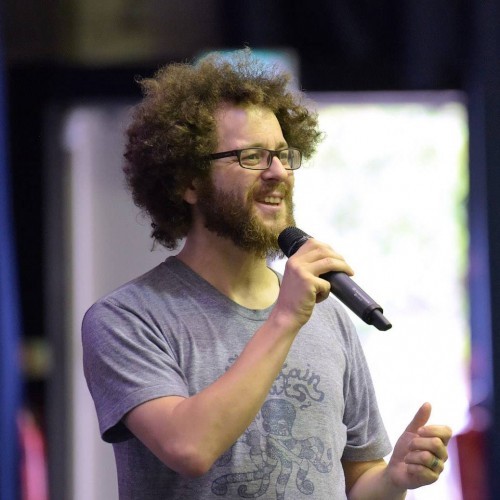 Jonny is an elder at ChurchCentral in Birmingham, and leads Sputnik, a project dedicated to showcasing and supporting art with a Christian worldview. He is married to Jemma and they have three children.